This has been an epic summer. So many good things took place in New Westminster, and there is a lot to look forward to in the coming months.

When we look back at 2014, we might remember it as the summer that Street Festivals really took off.

Sapperton Day is always a great one-day fest, two Uptown events and a real growth in the excitement around the 12th Street festival, our existing events are getting stronger. But it was Columbia Street in Downtown that went crazy. Show & Shine is always epic, but the Pride Street Fair and Columbia StrEAT Food Truck event showed that our appetite for closing streets in the summer is hardly slaked. There were people at last week’s events wondering why we don’t close streets more often.

My first comment was that the streets were anything but “closed”. Tens of thousands of people arrived to talk, walk, eat, listen to music, shop, and share tables in a place where there would normally be cars trundling along. Calling that a “street closure” reinforces the conceit that our public spaces are best used for moving cars through. I like the idea of calling these events “Street Openings”.

My second comment was that yes, the City can probably hold more of these, every second Saturday from Canada Day to Labour Day might be possible. However, these are not City-run events. These are events put together by teams of volunteers with help from not-for-profits like the Downtown BIA and Pride. They don’t just happen, they take planning, execution, a whole lot of energy, and the assistance of sponsors. The City assists with grants, Bylaw exemptions, and donations of services, but they don’t organize the event. If we want more of these, people are going to have to step up and organize them. The good news is that recent success will make it much more likely that the City will say “yes” when another event is proposed and comes with a solid proposal. 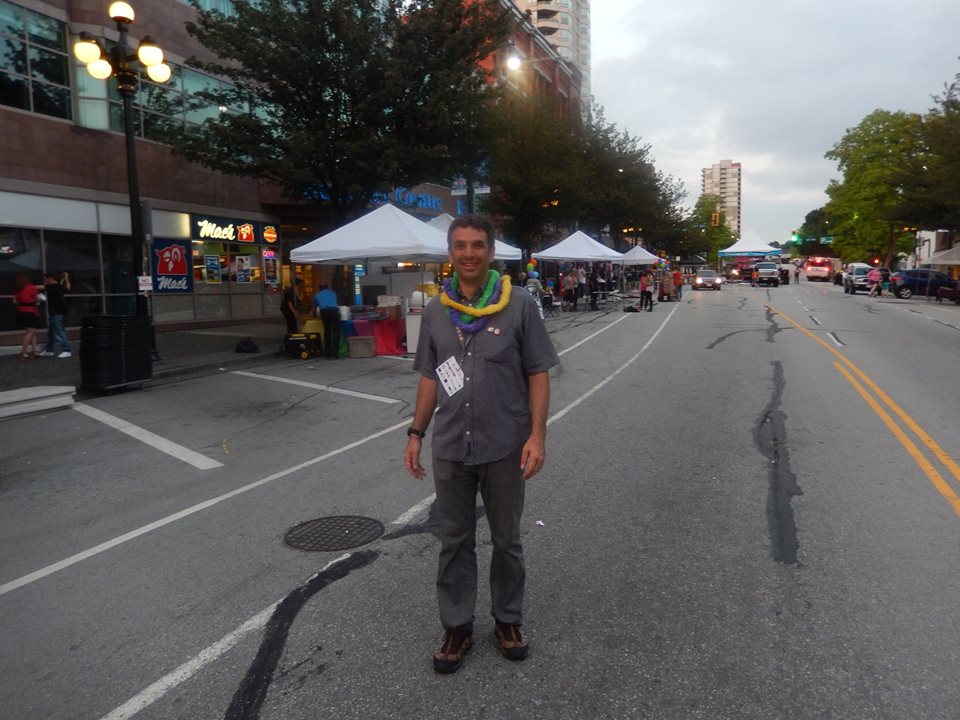 Tired volunteer at the end of the Pride Street Opening. We moved a lot of tables that day.

Other than volunteering at and/or attending Street Openings, I have been knocking on more doors. Someone has to write a book one day: Adventures in Door-knocking. There is such an interesting mix of ideas and opinions you encounter in any 4-block radius. Any notion you may bring about how one specific area votes, or what the consensus opinion is in another are soon dashed when you start chatting with people on the doorstep.

This is why it is such a valuable experience for someone like me, who is running for Council for the first time. As pointed out by a supporter this week on Facebook and discussed on Twitter – neither of these social media replace face-to-face conversations. As a non-incumbent, there are a lot of connections I have yet to make in the community before I have anything resembling “name recognition”. So back to the door-step I go.

The best part? Door-knocking is actually fun. It is full of unexpected moments, it is a constant learning experience, and people are, for the most part, genuinely happy to have a conversation about the neighbourhood.

See you out there on the streets!