As I made clear in my previous post, my “machine” comprises volunteers, friends, donors, and a diverse group of supporters who have made this campaign fun. I really hope I have the stuff to make it successful. But what about the New Westminster and District Labour Council? If it isn’t a “slate”, it isn’t a “party”, it isn’t an all-powerful shadowy cabal bent on power, what is it?

*I need to emphasise here, I am not speaking on behalf of the Labour Council, nor have I asked their permission to print this or asked them to review this. Everything below is what I have learned from my experience as a first time candidate that has been endorsed by the Labour Council. Other candidates may have different views and different experiences, and I can’t speak for them.*

When I started thinking about running for City Council in the spring, I reached out to several people for advice, including my immediate support group, a few prominent local business people, some volunteers on boards around town that I’ve worked with, and some of the current Council. I also went to City Hall and had a meeting with the Mayor.

I asked basic questions: what’s it like? Is my understanding of the job accurate? Am I electable? Through all of these conversations, I received nothing but encouragement, and more than a little advice.

Several people advised me to send a note to the Labour Council to let them know I was considering running, and so I did. A few weeks later they sent me an application for endorsement. It was a survey similar to the ones I have filled out with the NewsLeader, Record, Vancouver Sun, Dogwood Initiative, Alliance for the Arts, etc., and not unlike the questions I am being asked at the doorstep: Why are you running? What is your history in the City? Why should people vote for you? What do you think are the City’s biggest issues? I thoughtfully filled it out, and a few weeks later I received an invitation for an interview.

At the interview, it was more of the same. I was asked questions about the Pattullo Bridge (something I was happy to talk about!), about solid waste management (another topic I was comfortable with), about examples of my community service (an easy one), and about what my plan was to get elected- did I have a support team? Did I have any idea how to fundraise? Did I have any name recognition in the City? It was a friendly and non-confrontational discussion, and my impression coming out of it was they were mostly interested to see if I knew my stuff, was able to present myself as a rational and reasonable individual.

A month or more later, I was informed that I should anticipate receiving NWDLC endorsement, and that I should contact the other endorsed candidates to determine if we wanted to work together. I noted at the time that there are people that are endorsed by the Labour Council that are not members of labour unions, and there are people running in the election that are in labour unions but were not endorsed. Clearly, “membership” was not a primary selection criteria.

The other candidates and I arranged a meeting sometime in September, and discussed if there was anything we wanted to share resources on. I had already been out on the trail for about two months, and had already done a lot of the prep work, so it was an interesting discussion.

Of course, the endorsement meant that labour unions were more likely to provide funds to my campaign. As a proud member of CUPE, I primarily had access to CUPE funding, and up to now, that is the only union that has cut me a cheque. Fundraising is not completely over, but I estimate somewhere between 1/4 and 1/3 of my funding will come from Labour, the rest from individual donations. Did that money help? Absolutely. Was it essential to my running a strong campaign? Probably not. Besides, non-endorsed candidates had received money from labour in previous elections.

The third leg of the “Labour Slate” bogeyman is that somehow my independence as a Councillor is sacrificed by that endorsement. I can unequivocally say no member of the Labour Council has ever told me what to say on this campaign, nor have they told me how I will be expected to vote at the Council table. If anyone thinks Chuck Puchmayr,  Bill Harper and I are going to agree on everything at the Council Table because of our shared endorsement, they don’t know any of us very well. We all have our own ideas, and our own passions about the City, and I look forward to debating with them. Further, I have a five year legacy of writing my opinions, my ideas, and my vision for this City, long before I sought or received endorsement, and I stand by that record.

As for the fear that “Labour dominated” councils are monolithic and all powerful, pushing taxes up while writing sweet union deals? The evidence just doesn’t reflect that. Here is a table that shows the total Municipal tax paid per resident in the 17 Municipalities in the Lower Mainland, according to those radical lefties at the Fraser Institute. The red bars represent Municipalities where a majority of City Council was endorsed by their District Labour Council last election. I’m sorry, the correlation just isn’t there: 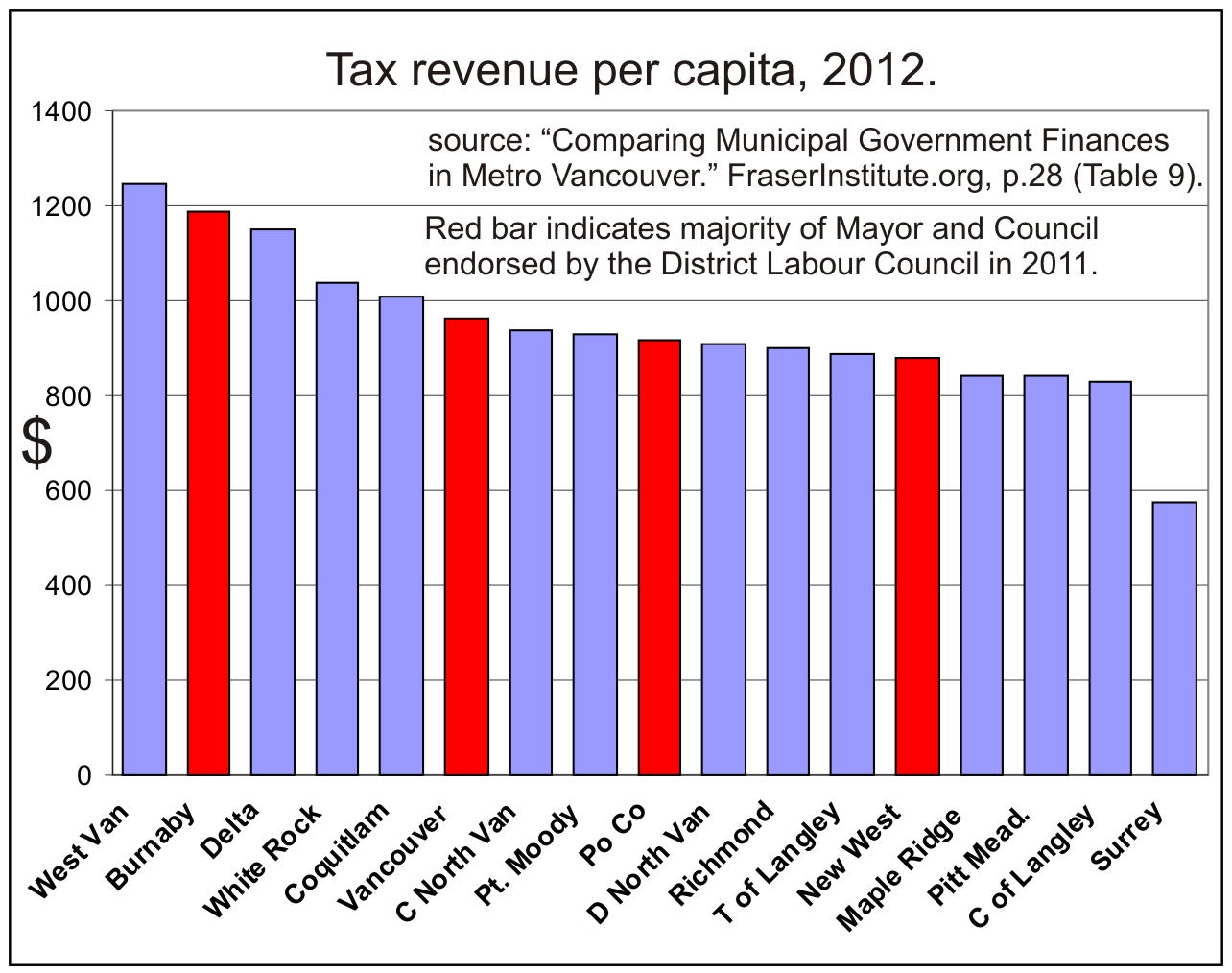 So instead of tilting at the windmill of “Labour Slates”, I encourage you to go to this page, and see what your neighbours in New Westminster are saying about my candidacy. I have always challenged people in this City to look past the rhetoric and the silliness, and look at the facts. I plan to bring that fact-based straight-forward approach to City Council. That is who I am, and that is why I have received endorsements from many people across New Westminster. I am proud that the Labour Council thinks I am a candidate worthy of endorsement, and I am proud of the other endorsements I have received from people I respect in the City’s volunteer, public service, and business communities.