I saw this story in the paper, and could see by the tone (and some social media flitter) that some people are wondering why Council decided to spend up to $20,000 on getting out the YES vote on the upcoming Metro Vancouver Transportation and Transit Plebiscite. I shouldn’t presume to speak for all of Mayor and Council, but I can give you my reasons

Transportation is the #1 issue in this City, and was so during the last election. At that time, this Mayor and the successfully-elected members of Council talked about their vision for addressing this issue, and it centered around implementing the newly-developed Master Transportation Plan. That is the mandate the voters gave us. The MTP contains a variety of goals and strategies, and they are all supported by the plan for transit and transportation infrastructure outlined in the Mayor’s Plan. None of those goals are supported by a NO vote.

Further, during the election I was told by citizens at the doorstep, by people in the media (social and no-so-social), and even by other candidates during all-candidates meetings that the City needs to work collaboratively with our neighbours to solve the regional transportation issues that are impacting New Westminster. The Mayor’s Plan that we are being asked to vote on was developed in collaboration with all of the municipalities in Metro Vancouver, and was approved by the vast majority of them. This is what working collaboratively looks like.

$20,000 is the cost of a single parking spot. If a YES on this referendum means one more person has access to reliable transit for their daily commute, and the City has to build one less parking spot, we have already broken even.

$20,000 is about 0.7% of our annual paving budget. If traffic is reduced by the infrastructure that comes with this plan enough to reduce the wear on our streets by 0.7% for just one year, then the City breaks even.

$20,000 is less than it costs to respond and investigate a single road fatality in the City. If one less person in a car, on a bike, or walking, is injured or killed in an MVA in our City because traffic is reduced, or because they now have access to a night bus, or because the Pattullo Bridge is made safer, then the City is financially ahead.

A YES vote will bring hundreds of millions of dollars of infrastructure improvements to the transit and transportation system every person in New Westminster uses every day. $20,000 is a good investment, and we (as elected officials responsible for making good economic decisions for the citizens of New Westminster) would be fools to not support the YES side of this referendum. 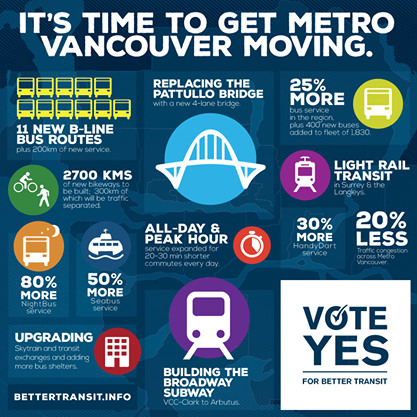